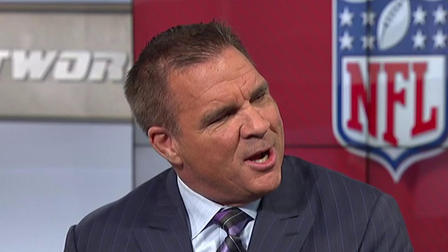 Q & A with football analyst Brian Baldinger and his experience with PEMF.

When Brian Baldinger visits the NFL Films offices in New Jersey for his work as an NFL analyst, he is faced with a choice. Since he needs to get to the third floor, he can take the elevator or the stairs.

That choice is a simple one.

“I don’t even look at the elevator anymore,” said Baldinger, who had a wide array of injuries from his 11 seasons as an NFL offensive lineman. “Some days, I run to the top of the third floor only because I can.”

That is a bit unusual for a guy who just turned 58 and has undergone reconstructive knee surgery, had a torn meniscus, broke two metatarsal bones and had an abdominal muscle detach from his pubic bone.

So why is he feeling in such great health?

Getting Back Into Action

When Baldinger underwent emergency surgery at the beginning of August 2015 for a staph infection in his right knee — the same knee he tore up in a 1985 exhibition game with the Chicago Bears — he was “glued to the couch” as he recovered. It came at an inopportune time as he was supposed to be visiting NFL training camps for NFL Network.

To get back into action, Baldinger took the advice of his sister, Jeanne Peters, a health and nutrition expert. Peters had come across the PER 2000 from Pulsed Energy Technologies. The PER 2000 uses Pulsed Electro-Magnetic Field (PEMF) therapy to attack injured areas and help speed recovery.

Baldinger contacted Pulsed Energy, who sent a machine to Baldinger to aid the rehabilitation.

“I did it pretty religiously every day, twice a day, sometimes three times, administer myself the pulsed energy in different places,” said Baldinger, who also provides analysis on NFL and college football broadcasts.

“The Pulsed Energy team would check in with me to see how I was doing, make adjustments along the way, try it on different parts of my body, etc.”

“But I got pretty used to doing it every day, to the point where I ended up going back to work the first couple days of September. I still used it all the way through September.

By about the end of October, I started getting better and by November, I felt I like I was on my way and by January, I felt I was pretty much healed.”

I did it pretty religiously every day, twice a day, sometimes three times, administer myself the pulsed energy in different places.”

“By about the end of October, I started getting better and by November, I felt I like I was on my way and by January, I felt I was pretty much healed.”

To the point where he sprints up the stairs at work.

“Six weeks after using machine pretty religiously was where I felt like there was an improvement and felt like I was going to overcome (the pain),” Baldinger said. “To the point now where it is such a distant memory. I can’t remember when I felt this good. I never felt this good in my 40s.”

“The health I have right now I never thought was possible — ever. I would say the quality of my life is directly in proportion to my health, what I can do, and there’s nothing I can’t do.”

Dealing With The Pain

The pain of going through the surgery was unbearable for Baldinger.

“If I was on the couch and someone came to my door, I would do everything I could not to get up and go to the door — waive ‘em in, tell them to come around to the side door, whatever I could do not to get up off the couch,” Baldinger said.

“I could be starving and I knew there was food in the refrigerator and I was like, ‘I would rather starve than get up and walk 10 steps to the refrigerator.’ Those types of decisions for the better part two months where it just wasn’t worth moving the knee or putting it immediate discomfort.”

In addition to using the PER 2000, Baldinger did regular rehab and even had a stem cell treatment in order to resume his normal activities, which include getting through airports and going up and down stadium steps.

“It really feels like a miracle, to be honest with you,” Baldinger said. “How much is Pulsed Energy, how much is the operation and how much is getting other therapy? It’s hard to say one vs. the other, but I really believe wholeheartedly — that I wouldn’t be where I am today without (Pulsed Energy). And I would recommend that anybody who is in the type of pain — for whatever reason — that I was in, you’ve got nothing lose but to try it and put belief in it.”

“I can’t remember when I felt this good. I never felt this good in my 40s.  There’s nothing I can’t do right now.”
“It really feels like a miracle, to be honest with you.”

If it wasn’t for the emergency surgery, Baldinger was facing drastic options to relieve what he thought was normal pain from his football injuries.

“The best thing is I’m an athlete at the core and I can do athletic things. I’m not up to playing basketball anymore, but I can shoot around with my niece and nephews and all that stuff if I want to, but I can train to feel really, really good.

I’m in excellent shape right now. I’m not prohibited from doing anything. I don’t need to run but I can if I want to. But it feels real good to know that whatever my trainer wants to do that day, I can do.”

Baldinger feels he “maximized” his NFL career, even with all of the injuries, and now he is trying to get the most out of his life after playing football. That opportunity comes because he took a chance with Pulsed Energy’s PER 2000.

“I read the information — I think some people won’t try something until they fundamentally understand everything about it,” Baldinger said. “I didn’t really have the time to do that. I was fortunate Pulsed Energy Technologies sent a machine to my house and I had it for six months before I sent it back.

“I don’t pretend to tell some potential user of it how it works, I don’t have the answer to that. I would just tell people, ‘Look, you don’t have to fully understand all the science to make you healthy. If you get results, you get results.

The Results Speak For Themselves

The results will speak to any sort of science so that you may help understand what’s behind it.’ I had blind trust in it, nothing to lose, I wouldn’t let time or not knowing stop you or prevent you from using it or trying it.”