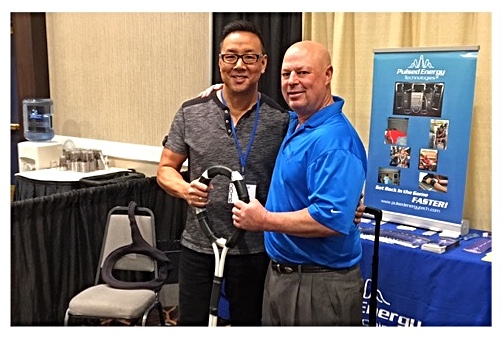 A year later, endless questions have been answered with PEMF

There is no common thread as to what causes those diverse set of health issues, but there is one thing a Southern California chiropractor has used to help with those ailments.

Dr. Ken Toy, whose practice in Temecula, Calif., is primarily for families but also includes an assortment of professional athletes, has been using the PER 2000 from Pulsed Energy Technologies for a little more than a year. He currently has three machines — two large and one portable — in a single room and often has two of the PER 2000s being used on clients simultaneously. (The noise from all three was a bit much, Toy said.)

He came into contact with the PER 2000 during a Pro Sport Chiropractic seminar in Las Vegas
in 2015. While roaming the aisles, he heard the distinct noise of the PER 2000 machines.

“I heard their ticking going on and I had never heard ticking in our vendor area,” Dr. Toy said. “I saw several machines set up, posters of pro players and teams.

I must have asked 20 to 30 questions about it since I was definitely interested in it because I had never heard of it before. Everything that I heard was just fascinating and I thought it was something I definitely could see being an adjunct to my office.”

While Dr. Toy’s interest was significant, he wasn’t sure he wanted to take the leap of faith and invest in the technology. So Pulsed Energy Technologies loaned Dr. Toy a machine for a couple weeks to use at his office.

“It was the first day that (Josh) showed up and trained us,” Dr. Toy said. “Patients were lined up and were like, ‘Oh, my gosh, you’ve got to get one of these. This thing is amazing.’ So even in their first session, they could feel that this was something different than what they’ve had before. … So right away, that got rid a lot of the skepticism.”

That was just the beginning of the surprises for Dr. Toy and his clients while using the PER 2000 and Pulsed Electro-Magnetic Field (PEMF) therapy.

“What has really surprised me is what I would call all the non-musculoskeletal conditions that we are treating,” he said. “When I first got (the PER 2000), I kind of pictured using it on the people that had the difficult conditions — the rotator cuff, the plantar fasciitis — I already had in my mind a target audience. But the more that we learned and the more that we actually utilized it, we are now working on more non-skeletal conditions.”

Clients with those various conditions are often just looking for a ‘Hail Mary’ to help them in any way possible, even if it is just temporarily.

“A lot of times, we explain that when your condition hasn’t gotten better, it all gets down to the cellular level, where those cells remain inactive and weak in the area. We tell them the science behind what the PER does and the first session is completely complimentary. We’re like, ‘It can’t hurt you, everything we just told you-you can find on the internet. None of what I told you is a company testimonial. It’s all 100 percent backed by science.’ … They’re like, ‘Hey, I’ve got nothing to lose.’ So they’re on board. No one has ever said, ‘Ahhh, no, I’m going to pass.’ They’ve all said ‘Let’s give it a try.’”

There are a handful of cases that stick out to Dr. Toy: two paraplegics, a family with Lyme disease, an elderly woman with Bell’s palsy and a woman with a liver disease.

While the two paraplegics both sustained similar injuries as a result of accidents in professional motocross competitions, their treatments were for very different conditions.

A man in his early 20s who broke his spine at T-4 was paralyzed from his nipple line down. This essentially left him without his upper abdominal and diaphragm strength, preventing a Valsalva maneuver. He came in for sessions one to three times a week and soon saw results. The paralysis line moved down 3 inches, according to Dr. Toy.

“After about the first two weeks, with the paralysis line moving down to the upper abs, he was actually able to contract his upper abdominal (muscles) and that gave him better stability while sitting in his wheelchair,” Dr. Toy said. “For the first time since he had injured himself, he had the ability to perform a Valsalva maneuver, which is to bear down … which made his morning bowel movement session so much faster.”

Due to the improved upper-body strength — which has come about with traditional physical therapy — the client also can get in and out of his truck easier.

His ability to stand has also improved, with assistance and bracing, further improving his quality of life even if he never walks again.

The second paraplegic was a strange case. This motocross rider was in his late 30s and broke his spine at T-4. Despite his paralysis, this client somehow felt “excruciating electrical pain” in his extremities.

“I said, ‘If you’re paralyzed, how are you feeling pain in your lower legs?’” Dr. Toy said.

“He said, ‘Exactly.’ He goes, ‘I just feel like I got the short end of the stick on everything. The doctors can’t really explain it. I wake up and my hands hurt, my stomach hurts, I’ve got sciatica.’

“So when he came in, we just tried to pulse those areas to see if we could help take away any of his nerve pain, increase any circulation. And so even after his first session, he said he woke up the next morning, he said his hands didn’t hurt, his stomach didn’t hurt and there was already a difference in his sciatica.”

For the family with Lyme disease, the usual treatment of antibiotics wasn’t achieving the success they wanted. The parents had contracted the disease, which was passed on to the two daughters.

“What we did, in that case, is work on what we call the energy spots,” Dr. Toy said. “The heart, the brain, the adrenal gland, the liver, the feet. I just kind of describe that as a full-body juicing. … We’re just trying to send energy to all areas of the body and in doing so, for them, it has been the best thing that has actually gotten rid of their episodes of Lyme disease and actually kept it away.”

All four stop in for a monthly session, but they have not had any further of the lengthy episodes typically associated with Lyme disease.

One day, an elderly woman dressed to the nines walked into Dr. Toy’s office. It was obvious she had Bell’s palsy as her face drooped and one eye was shut.

It was a case Dr. Toy was excited to see as he had heard from Pulsed Energy’s founder, that Bell’s palsy could reverse the symptoms and restore function to the facial muscles. He was also excited to help this client, whom he and his staffers affectionately call “Glam-ma” due to her dazzling wardrobe.

“I told her results are often seen in as little as five sessions and that we can actually fix it,” Dr. Toy said. “She said, ‘I knew you were the place I needed to come.’

During her first session, as she is holding it over her face, her eye is trying to open up. That was on a Thursday. When I saw her two days later on a Saturday, her eye was already 50 percent open and her face was 50 percent lifted — and sure enough, after her fifth session, she was completely done, completely healed.”

The final standout case could be one for the medical books.

It is a woman in her mid-50s who has nonalcoholic steatohepatitis (NASH), a fatty-liver disease. Dr. Toy said the goal with treating NASH is to keep it under control and stop the inflammation. If the inflammation gets out of control, it could lead to death.

There are two enzyme levels that are great indicators of the disease: aspartate transaminase (AST) and alanine transaminase (ALT). Generally, Dr. Toy said, these levels shouldn’t be over 90. When this woman came to see Dr. Toy, her levels were at 99 and 100. So she began PER 2000 sessions twice a week for six weeks.

She went back to her liver doctor, who ran the AST and ALT tests again. He was stunned by what he saw: Her levels were at 38 and 44.

“Her liver doctor looked at the lab results and looked at her and said, ‘What did you do? We don’t see this,’” Dr. Toy said. “To my understanding, once you get NASH, it’s progressive and I guess best-case scenario is you are trying to slow down the inflammation and so you are trying to slow down the rising of those enzyme numbers. Based on what I know, to not only stop it but to cut it in half is probably unheard of in their field. So he got brochures from my patient and asked if he could call her chiropractor.”

With all of these success stories, you would think PEMF therapy and Pulsed Energy’s PER 2000 would be the latest craze sweeping through the medical field. But it isn’t — yet.

“I think it’s because they’re starting to get the successes and the word of mouth is beginning to spread,” Dr. Toy said. “I asked the Pulsed Energy Technologies team the same thing, ‘Why doesn’t every team have this?’ And he said, ‘Exactly.’ He says it’s really the unknown.

No one is taught this technology in school. So if you don’t get this (knowledge) in school — then you might read about it in a journal or you might get introduced to it at a seminar — but if you don’t get it in school, I would say what we do in practice, most of it was learned in school, so most people are going to be slow and hesitant to add something new and radical to their practice.”

New and radical may need to come from the next generation of chiropractors and other similar practitioners who will be looking to help elevate their profession to the next level.

A New Movement For Health Care

“With the beginning of the baby boomers retiring, there is going to be a huge shortage of health care professionals to take care of (clients),” Dr. Toy said. “And with all of the changes to insurance — more and more, it’s going to a cash practice because deductibles are so high — you need to plan ahead and think outside of the box as to how you are going to afford to continue to care for these patients.”

And this state-of-the-art technology could be just the thing to satisfy everyone’s wants and needs.